Written by Companion Consultancy on May 4, 2020.

The results of the National Milk Fever Survey1, launched by Boehringer Ingelheim Animal Health, manufacturer of Bovikalc®, have been analysed, with some important insights and areas for focus highlighted. The survey, which generated responses from 187 farmers, found a wide degree of variation in how well the signs and possible consequences of milk fever are recognised – with some significant knowledge gaps that could be preventing the condition from being tackled effectively, in particular the inappropriate use of calcium injections for prevention.

The survey found that almost all farms had downer cows on their farm in the last 12 months, with one third reporting that this was a frequent occurrence. On average, farmers reported six cases of milk fever on their farm each year. This level of clinical milk fever is clearly a significant headache for the farms concerned, but the survey results suggest that subclinical milk fever and its possible consequences may be having a much greater – unacknowledged – impact.

Subclinical milk fever can be a factor in many common fresh cow conditions such as ketosis, endometritis, retained foetal membranes (RFM), left displaced abomasum (LDA), stillbirth and reduced milk yield2.  The vast majority (87%) of farms reported at least one of these conditions occurring in the last 12 months. 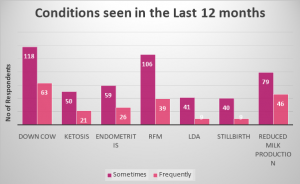 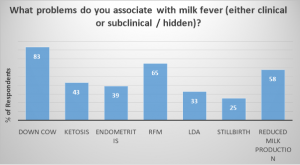 Farmers were concerned about all the costs associated with milk fever – not just the cost of treatment, but also the cost of lost productivity and the hidden costs. However, it is apparent they are not linking milk fever to some of the biggest sources of lost revenue, including 42% being unaware that milk production can be affected, and over 50% not linking common metabolic consequences such as ketosis and LDAs. The relative importance of different costs varied considerably amongst farms, suggesting a conversation needs to had to determine specific concerns. Comments on the impact of milk fever included “the subclinical side can be very expensive” and “prevention is definitely cheaper and easier than cure”.

Dry cow dietary management was implemented on most farms as a preventative measure. Most commonly a low calcium diet and/or magnesium supplementation was used for all dry cows, with fewer farms specifically targeting older, high yielding or lame cows. Higher risk cows were also commonly given calcium – most frequently by injection or bolus – as a preventative measure at calving. A total of over 40% of farms gave cows calcium injection as a supplement, approximately the same proportion used boluses.

Kath Aplin, Veterinary Adviser at Boehringer Ingelheim Animal Health comments, “It’s a concern that so many farmers are using calcium injections as a preventative measure. It suggests we need to improve understanding of the counter-productive down-regulation of calcium mobilisation that can occur as a result of the rapid rise in blood calcium after an injection. An oral bolus such as Bovikalc®, which contains anionic calcium salts, promotes calcium mobilisation to maintain longer term calcium homeostasis and reduce potential losses due to subclinical milk fever.”

Kath Aplin, says, “There is good evidence that targeting high risk cows with a calcium bolus such as Bovikalc® reduces the risk of subclinical milk fever, and with it the incidence of fresh cow conditions, even in herds with a well-balanced dry cow diet and with clinical milk fever well under control2. Studies have shown that the cows benefitting most from calcium boluses are lame cows and high yielding cows, but a whole herd approach – bolusing all cows above second lactation – is a simpler option for many herds and is also consistently cost effective3.”

The survey revealed the cows that most commonly received a bolus were older cows. Only 3% of herds were targeting lame cows for calcium bolus supplementation, and 14% were targeting high yielding cows. This highlights some groups of cows that might benefit from calcium bolus administration at calving to reduce the risk of developing those costly conditions associated with subclinical milk fever.

When choosing a calcium bolus, farmers consistently valued ease of use and the amount of calcium provided above other criteria, with cost ranked as much lower importance.

Kath says the Boehringer team will continue to support vets in educating farmers regarding the impact of subclinical milk fever on their herd health and productivity. A safe, cost-effective, evidence-based whole herd protocol for calcium supplementation should help to mitigate losses. “One Bovikalc® bolus given at the first signs of calving and one given immediately after calving is our recommendation, with a further one to two given at 12-15 hour intervals if necessary. It’s simple but could help farmers have healthier herds, with reduced costs and improved productivity.”

She continued, ”We are working with vets to provide support and resources for farmers to ensure they receive the information and help they need to more effectively manage milk fever and its consequences on farm.”

Veterinary practices across the nation have faced some difficult...

Want to learn more about us or discuss a project?